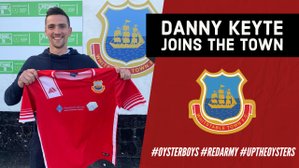 Richard Styles is delighted to announce the signing and return to WTFC of Danny Keyte. At only 28, Danny has played over 300 games throughout his career. His consistency and versatility have given him lots of experience in the game. Strong in both central midfield and central defence, after WTFC he went to Canterbury City where he was club captain for a number of seasons before spending half of last season at Tunbridge Wells. Danny loves the club and is really happy to be back.