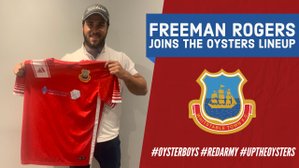 Richard Styles is pleased to announce the signing of defender Freeman Rogers to WTFC. Freeman again is still relatively young, but is heavily experienced with over 300 games to his name in the SCEFL and Isthmian leagues. A natural leader and someone who wears his heart on his sleeve and will run through walls for his teammates, Freeman spent last season at Sittingbourne and Sevenoaks Town before finishing the last 10 games at Tunbridge Wells and has played for a host of clubs as well as captaining many such as Chatham Town, Lordswood and Faversham Town.