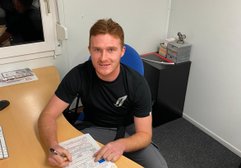 Whitstable Town are pleased to confirm the signing of Tom Carlton from Herne Bay. The talented midfielder played youth and academy football at Chelsea, West Ham and Colchester before initially joining Herne Bay in 2017. Following a spell at Hythe Town he returned to Herne Bay in November 2019. We look forward to seeing him in a Whitstable shirt once football is able to restart.

Manager Lloyd Blackman said:
“I’m absolutely delighted to announce the signing of Tom Carlton.
Tom is a player I’ve admired for many years and someone who brings a lot of creativity to our attacking third. I’ve tried to sign him many times, so I’m delighted to finally get to work with him.
I’ve been very open with Tom when speaking to him and he feels this is a move that can help him push on with his development as well helping the team when we return to playing after this current lockdown.
Welcome to the Oysters Tom.”