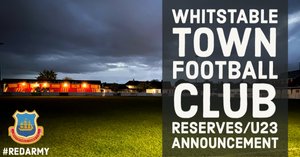 Big News with our Reserves/U23!

Whitstable Town Football Club are delighted to announce the appointment of Matt Barman and Martin Mills as the new Reserve/U23 management team for the new season.
This is an exciting club development and in line with the club philosophy of developing homegrown Whitstable players, providing opportunities at the senior level and representing the club at the First Team level. This new structure will work with the newly appointed First Team management, Richard and Dan. It will also allow former Reserve team manager Josh Algar to concentrate on his work with the Academy, development centre and coaching through Football Futures. We would like to wish them all well in their new positions for a very exciting season ahead.

The proposed restructuring includes the appointment of a Head of Football Development, Ian Grieves. Ian's role will be to liaise with managers/coaches from the U16s, U18s, Academy and Reserves to recommend progression opportunities and a pathway to the First Team. This role is committed to player development and identifying player talent within the club.

There will be a number of club roles identified to create the newly formed Whitstable Town Development Group. This group will support the coaches and managers at all levels to nurture talented players through the club structures.

There are exciting times ahead at Whitstable Town with the introduction of a new 3G Pitch at the Belmont Stadium.