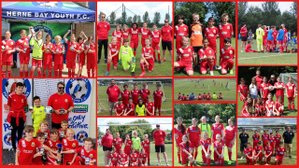 Congratulations to our U10 Girls and our U9 Reds who both won the Herne Bay Youth Summer Tournament.

Bright sunshine and penalty shootouts galore were the order of the day this weekend as 15 of Whitstable Town’s youth teams took part in the Herne Bay Youth Summer Tournament this weekend.

Huge congratulations to the U10 Girls and the U9 Reds who both came away as tournament winners. The U13s also made it to the final, only losing that in a penalty shootout marathon 16-15! With a further 7 teams reaching the semi-finals it was a good weekend all round.

A big thank you to all the Whitstable players who took part, were great representatives of the club, and moved around the pitches to cheer on their fellow teams when not playing themselves.

Our girls' teams have one more tournament in a few weeks, but for our mixed teams, this tournament signalled the end of their season. We hope all our players enjoy their summer and we look forward to welcoming you back for the new season.