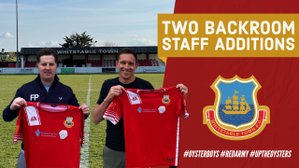 First Team Manager Richard Styles is delighted to announce the addition of Chris Woolcott to his backroom staff. Chris was previously 1st Team Manager at Canterbury City before joining Sevenoaks as coach last season. Heavily experienced previously working at Sittingbourne & Ramsgate. A football academy coach and a great guy who knows the club and local area and is someone the players will engage with straight away in a way that develops our philosophy at WTFC.

Mark Towse also joins Richards Backroom staff. Mark Towse, is an experienced coach working with both youth and senior players. Mark previously played at Hythe Town, Maldon & Tiptree & Corinthian-Casuals, before retiring and having spells playing and coaching at Folkestone Invicta. His knowledge and passion will be a huge benefit to the club going forwards on and off the pitch.

We are pleased to announce that Kitman Ada Hubbard remains with The Oysters. Ada is a much-valued member of the club and backroom staff, ensuring everything is ready for the players on matchday and at training.