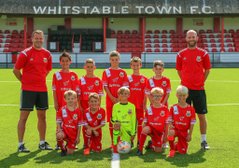 Under 9's serve up a goalfest down in Dover

At the start of a week that saw world leaders gather in London, Messi & Rapinoe collect their Ballon D'Ors and Amazon prime launch its premier league football service, the real football entertainment was to be found down in Dover at 10am on Saturday morning as WTFCU9s and St Margarets served up a goalfest thriller more memorable than a pizza in Woking!

The early trek to our longest away adventure of the season saw the boys arrive via a pot-holed track to find the mini pitch. The joy lane Lurgy that had downed two of the boys last week, had knocked out Flynn this time who came along in a supporting role. With Daylee also unavailable we were down to 8 players, so just the one sub.

Last week saw the super 7 put in a spirited performance and play some great football without getting the rewards, would this week prove to be a different story?...

..You bet it would, the lads were magnificent and we got a morale boosting positive result that our recent performances deserved. It probably wasn't our best footballing performance and neither team was helped by the small boggy pitch, but in terms of effort and enjoyment it was up there with our best of the season.

Louis started in goal and did really well with a number of the opponents efforts, his goal kicks were greatly improved. As has been the custom of recent weeks we swapped him out onto the pitch in the second half and he put in great effort in the centre forward role, chasing down defenders and showing some lovely skills.

Max P was a rock at the back in the first and in his combative style made some great defensive tackles and made sure our opponents chances were limited. He moved in left midfield in the second half and drove forward at every opportunity to support the attacks.

Finn worked well along side Max at the back in the first half and got forward when available. He put in some great trade mark corners and got an assist for the first goal. He was in nets for the second half and made some super saves.

Kasper was winning everything in the heart of midfield and played a great role in helping us dictate the tempo of the game, driving forward and being disciplined when needed, chipping in with an assist as well.

Harry had a great first half on the left of midfield, showing some nice touches and notching up a couple of assists. He switched to the back for the start of the second half and made some useful interceptions.

Otis battled brilliantly in the first half on the right of midfield, strong in the tackle and making some great forward passes. He did a great job when switched to the back in the second half.

Max B felt a little unwell in the first half but came on at half time and performed magnificently in defence and midfield as he broke down attacks and used his great skill and great decision making to link defence and attack.
The final comments are saved for a player who put in a fantastic performance noted by teammates, parents, coaching staff and the opposition. Alfie was brilliant in all aspects of his game, using his skill but also releasing the ball when needed to set up his teammates. He had a hand in all our goals, getting an assist and scoring the other 5, with some brilliant strikes. Noted by the manager was how he was the first to celebrate with his teams mates when he scored, as we emphasise the importance of the team ethic. He also showed great sportsmanship checking on an injured opponent, something that the St Margaret's Manager commented on. Take a bow Alfie, well played and a lovely attitude.

Overall the lads came away with a victory they deserved, well done all. The boys can be proud of the performances that they have been putting in, we haven't always got the right results but if we continue to work hard for each other and play the right way, we will have more good days than bad.

As we approach the Festive period we wonder if there will be an arrival of mince pies and mulled wine on the sidelines in coming weeks, we can but dream.