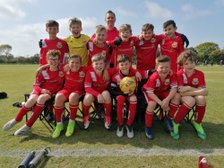 Lots of positives, despite a disappointing scoreline...

A still autumn Sunday saw Whitstable Town FC U12A travel to Monkton for a lunch time kick off. Both teams had had a tough start to the season and Whitstable were positive going into the game.

Whitstable were defensively solid despite Monkton applying strong pressure from the outset. Whitstable held firm until the 14th minute when a quick counter attack from the home side earned Monkton their first goal. Whitstable made some good breakaway runs in the latter part of the first half, but were denied by the Monkton keeper, who was quick off his line and made some good saves, denying George our forward an equaliser and resulting in the first half ending 1-0 to Monkton.

In the second half the team remained defensibly solid and played some good counter attacking football. Despite having the majority of possession, Monkton were unable to break down the Whitstable defence and were forced to resort to long distance shots which were easily dealt with by our keeper Thomas. The game remained at 1-0 until the 48th minute when a creative display by the home team provided them with their second goal.

The defenders Josh, Rhys and new addition Jake worked tirelessly throughout the game, causing the Monkton attack a great deal of frustration. Central defender Josh also made some great attacking runs in the latter part of the second half, finding himself with a good opportunity late on, only to be denied again by an outstanding display from the home teams keeper.

The midfield showed some good attacking flair which was driven by their Captain and Man of the Match Charlie with his continued hard work and relentless running. Whitstable also created some good chances with some excellent wide runs being made throughout the game by the wingers Ollie and Bradley.

The Whitstable coaches were particularly pleased to see their players closing down and marking their opposition so effectively which is something that has been a primary focus during training over recent weeks. It was also reassuring to see the team routinely playing out from the back, highlighting their increased confidence on the ball and following the club ethos.

The match ended 2-0 to Monkton but there were some real positives to take away from the game. The determination and resilience shown by Whitstable, despite being in a very strong division and some disappointing recent results has been admirable. We will look to learn from these games and use these experiences to continue to drive the improvements that we have seen in recent weeks.