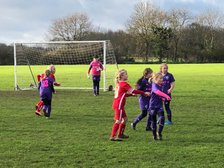 The u9s girls produced a very impressive performance against Medway Town on a windy morning at Radfall. Putting the opposition under pressure from the start it wasn’t long before the goals started to come for the girls in red. A magical two minute spell saw two goals, the first from Izzy with a delightfully cool finish, followed by an equally confident strike from Lottie. Ottoline was showing great positional awareness and strong tackling at the back as always, and Ava’s distribution from goal kicks was proving a real advantage. Whitstable grabbed a third when Flora intercepted a cross field pass and calmed slotted home with her left foot.

A couple of changes allowed Maggie and Sadie to display their skills. Maggie’s turns and drag backs were a delight, and Sadie’s wing play on the right was giving the opposition all sorts of problems. Medway did grab a goal back before half time though, a long range effort catching Whitstable off guard.

Ava and Flora swapped goalkeeping duties at half time, and Ava was clearly a girl on a mission, wasting no time in thumping home two terrific goals which gave the keeper no chance. Further chances came Whitstable’s way as the girls continued to press well and play with confidence. At the other end Flora was commanding her box well and mopping up any danger. The game ended with Whitstable still pushing hard for another goal, but they couldn’t quite add to what was already an impressive tally. Overall, it was a terrific team performance built on hard work and some moments of real quality.

Player of the Match: Ottoline