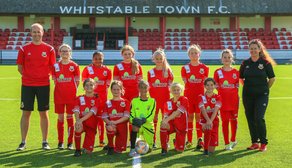 On the 2nd May 2021, Whitstable Town under 9 Girls welcomed Ramsgate at our temporary home- Swalecliffe primary school. The pitch was much bigger than the girls were used to and on arrival Emily commented “Look at the size of the pitch, I’m guessing we will be doing a lot of running!” The girls had an additional incentive to play well, as it was Annabel’s 8th birthday and cupcakes were on offer at the end of the game!
Whitstable started brightly in the first quarter with Tia & Maddie creating some good chances & the Ramsgate goal keeper making some terrific saves, alongside the crossbar and post!
Ramsgate came into the game in the second quarter but there was some awesome defending by Alys and Ayana to keep Ramsgate at bay.
Dorothy made some outstanding saves in the third quarter to deny Ramsgate several goals.
It was another terrific team performance and everyone‘s confidence, skills and game awareness is increasing every week. It was a cracking, even match with both teams playing really well and in the right spirit.
Well done to Iris who was voted player of the match by Ramsgate.
Thanks to Emma and Abbie for your constant support and efforts.
Moving onto Sunday when Whitstable welcome Anchorian Halos for our last home game of the season at Swalecliffe School
Share via
FacebookTwitter
https://www.whitstabletownfc.c
Recent news