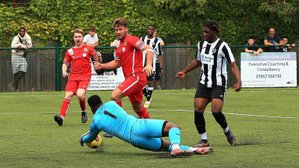 Oysters Start With A Win

On a very warm, cloudy afternoon, Whitstable did enough to earn maximum points and make a promising beginning to a new era for the club. A bright start might have brought several goals, but after missing one penalty, they were awarded a second just after the half hour mark and this time Ryan Flack made no mistake. The remainder of the match was more even, with few clear cut chances, but Fisher were unable to break through a determined Whitstable defence.

Their first game back in the SCEFL Premier Division, following relegation saw a very different Whitstable Town, with a new management and coaching team and a number of new players. The goalkeeper and defence had familiar look, apart from new captain Freeman Rogers, and there were returns to the club for Harry Stannard and Ryan Flack. James Huggins, Matt Gething, Fjord Rogers and James Jeffrey all made their debuts, as did the five substitutes, who were all used during the second half. Fisher finished 13th in the 2021-22 season, but this is never the easiest place to earn an away win. The journey to Rotherhithe was very difficult due to the volume of traffic on the approaches to London, presumably as a consequence of the rail strike, but there were a considerable number of Oyster supporters among the 178 crowd and a good atmosphere in the ground.

Whitstable started really positively, creating a number of early opportunities. Gething was the first to test goalkeeper Sam Amedu in the 2nd minute, but failed to get enough power in his shot. Jeffrey, Flack and Jake Mackenzie were all denied in the early exchanges, then a Will Thomas shot was cleared off the line following the first Whitstable corner in the 7th minute. Shortly afterwards, a blocked Flack shot was put into the net off the post by Fjord Rogers, but he was adjudged offside. A good Jeffrey pass picked out a well timed run by Gething, but he was also denied by the assistant’s flag, much to the frustration of the visitors’ bench. The first action at the other end came in the 13th minute when Whitstable lost possession and Fidan Fejzi shot wide. Huggins then forced a fine save from Amedu and from the resulting corner Stannard was fouled by Michael Sarpong and the referee pointed to the penalty spot. Fjord Rogers stepped forward, but Amedu made a good save low to his left. Former Rotherham United winger Darnelle Bailey-King was always a threat and had a shot saved by Dan Eason, then another effort was blocked after a dangerous run down the left. Malaki Coker shot well wide when the ball dropped to him following a throw in. Whitstable were awarded a second penalty when Mackenzie was brought down by Joseph Adewunmi after a determined run into the box. Flack took the kick, Amedu dived to his left again, but this time the ball went the other way and Whitstable had a deserved lead in the 31st minute. The remainder of the first period passed with little goalmouth action, although Amedu was out smartly to grab the ball when Jeffrey almost latched onto a chip into the area, to ensure his team just trailed by the single goal at half time.

The second half was a more even affair and the players began to feel the effects of the hot afternoon. In the 50th minute, a Flack corner was headed over the bar by Fjord Rogers. The first of nine substitutions was made by the home team, with the introduction of Joshua Montella, then Jeffrey was cautioned for an obvious pull back, before Whitstable made two changes, as Adam Turton replaced the injured Huggins and Harry O’Donnell came on for Fjord Rogers. Bailey-King cut in from the left, but his shot was easily held by Eason. Fisher went close in the 68th minute when Montella glanced a header just wide from a Fejzi corner. Whitstable might have added a second when Gething crossed from the left for Jeffrey who volleyed just over, then Amedu saved a Stannard shot. Montella was brought down just outside the box, earning Turton a yellow card, but Sarpong’s free kick struck the wall and was deflected behind. Whitstable won three corners in the space of a few minutes, without being able to capitalise. Fisher had one good opportunity as the clock ticked down when a Bailey-King cross found Sarpong, but his low shot was comfortably held by Eason. The new rule permitting five substitutes inevitably meant lots of interruptions to play in the closing minutes and there were Whitstable debut appearances for Alfie Prior, Joe Jarvis and Billy Robbins. The referee blew after six added minutes to confirm a 1-0 away win.

Whitstable will be pleased to have started their campaign with a hard earned away win and now turn their attention to an away FA Cup tie at Three Bridges.