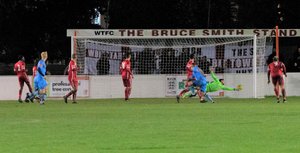 Following the disappointing end at East Grinstead in the previous game, this one ended in similar fashion as Whitstable again conceded a 92nd minute equaliser. The overall performances against two of the more fancied teams in the division were good however and two valuable points have been gained. Tijan Jadama gave Whitstable the perfect start with a good finish in the 2nd minute and chances after that were limited with neither goalkeeper having too much work to do, although Dan Eason saved a close range effort from Denzel Gayle in the first half. After the break Kieron McCann clipped the top of the bar for the Millers and Whitstable had a few chances to add a second goal, but it looked like one would be enough until substitute Rory Hill lashed the ball past Eason in added time. The teams also shared the cautions equally, but although the game was played at a high intensity, the eight yellow cards shown by the referee did not give a true reflection of events.

Whitstable would have gained some confidence from their performance at unbeaten East Grinstead, and for their opponents it was back to league action after a memorable 3-2 FA Cup win at National League Maidenhead United that booked their place in the First Round Proper. They have had a slow start in the league with one win, two draws and a defeat from their four games. Their squad has been boosted by some recent signings and included former Folkestone players Sam Hasler, Kieron McCann and Ade Yusuff whilst Connor Dymond arrived from Welling in the summer. Ryan Flack recently made the switch from Cray Valley to Whitstable and was in the home starting eleven. Jay Hards made his first start since returning from injury, although Luke Medley was unavailable.

There were no problems with the pitch after the wet weather finally cleared in the early evening and a decent crowd of 271 turned out to watch. Whitstable took the lead after only 80 seconds when Liam Gillies carried the ball forward and found Jadama who turned and hit a swerving shot past Joe Docherty from 23 yards. Aaron Millbank then did well on the right to make room for himself, but his effort went wide of the far post. The first opportunity for the visitors came in the 12th minute when a Hasler free kick was headed back across goal and met by the head of Ali Tumkaya, but the ball went over the bar. Yusuff then played the ball out to the left for McCann who worked himself into a good position, but shot straight at Eason.

The first of the eight cards shown by referee Graeme Ions went to Matthew Warren after he tugged back Hards. Luke Girt and Aaron Millbank soon followed him into the notebook for fouls and then Dymond for halting Jadama just outside the box as he ran on to a Millbank header. The free kick was played out to Flack on the right, but his shot was easily saved by Docherty. Gayle cut in from the right and dragged his shot wide before a challenge by Yusuff on Girt brought another card. On 34 minutes a Flack cross led to two blocked shots in succession by Girt and Hards as Whitstable looked for a second goal. A Francis Babalola cross was cleverly flicked towards goal by Gayle, but Eason managed to block and then push the ball away. Jack Miles and Tom Mills dealt well with any balls that came into the box and the half ended with Whitstable leading 1-0.

There was a presentation made to Tom Bryant during the interval in recognition of his 150 Whitstable appearances and the club thanks Richard Baines of City Awards for his help with this.

The first notable action of the second half was unsurprisingly another card, this time for a foul by James Brown. Whitstable had a good spell with a few opportunities to extend their lead. Millbank and Hards both delivered threatening crosses with nobody able to take advantage, the lively Hards made a weaving run into the box before being closed down and Millbank had a shot blocked. At the other end Eason was forced to head the ball behind whilst on his knees outside of his area and this led to three successive corners, the last of which saw a looping Babalola header caught by Eason. A good Whitstable move just before the hour mark saw Millbank sweep the ball out to Hards on the right and he rolled the ball into the path of Jadama whose shot was well saved by Docherty. It was then the turn of the Millers to go close as McCann tried a shot from the left of the area and the ball clipped the top of the bar. Veteran striker Kevin Lisbie came on in the 63rd minute to try to find an equaliser.

Whitstable had a good shout for a penalty turned down when Hards broke into the box after a one-two with Millbank and was unceremoniously pushed over by Tumkaya, but the referee waved it away. Danny Smith and Jack Miles became the final entries into the referee’s book before both managers made further substitutions. Flack shot over and Yusuff put an effort wide as the goalkeepers remained relatively untroubled. Hill was sent on in the 87th minute and it was an inspired move as he rescued a point for his team in added time. The experienced player has recently returned to Cray Valley having previously played for a number of Kent clubs including Maidstone, Bromley, Welling, Tonbridge and Ashford. Babalola won a tackle on the 18 yard line and worked the ball across to the right where Hill hit if first time, just out of the reach of the diving Eason. In the moments that remained, Flack had to limp off after being injured in a challenge by Warren and the game ended with the points shared.

Whitstable next travel to face fourth placed VCD on Saturday as they look to continue their improvement of recent games.