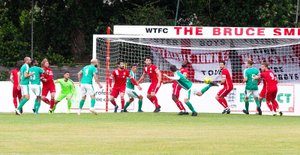 It was not a good start to the home league campaign at the Belmont Ground on a windy day by the seaside as visitors VCD Athletic left with all of the points after a good second half performance. The first half was a fairly even contest as the returning Aaron Millbank put Whitstable ahead with a good headed finish and Liam Gillies struck a post with a fine strike, although VCD failed to convert a couple of good chances. Two quick goals early in the second half turned the game around and afterwards Whitstable found it a struggle playing against a strong breeze and VCD added two more goals to cruise to an emphatic win.

VCD arrived at the Belmont having scored two late goals to beat Whitehawk in their opening game. They had opted to make a change in the summer, with long serving manager Keith McMahon being replaced by former Sittingbourne and Ramsgate boss Nick Davis and their team contained a number of new faces, including some former Whitstable players with striker Marcus Elliott in the starting eleven and a couple of other familiar names on the bench. Aaron Millbank was available after missing the two opening games, but Ollie Rowe was unfit to start as a result of the injury picked up at Sittingbourne and Luke Girt was also unavailable. There was a minute’s applause in memory of club stalwart George Corney before the kick-off.

Whitstable started quite brightly and a promising run by Millbank was ended by a foul, but Tom Mills struck the free kick into the defensive wall and then Millbank and Mills combined well, but the Vickers goalkeeper Nick Blue was quickly out to intercept. The first opportunity for the visitors came in the 12th minute when a left wing cross by Malachi Hudson was knocked down by Ayman El-Mogharbel into the path of Elliott, but his low shot was saved by Dan Eason. El-Mogharbel then collected the ball on the left before curling a right footed shot just wide of the far post. Whitstable threatened again when Liam Gillies played a one-two with Millbank before working a shooting position 25 yards out, but his shot cannoned off the inside of the left hand and rebounded across goal before eventually being put behind for a corner.

On 29 minutes Jack Barry was the first to be shown a yellow card when his firm challenge connected both with the ball and Tijan Jadama. Shortly afterwards Joe Bingham released Paul Vines, but he slid a great chance wide. Whitstable opened the scoring in the 32nd minute when Mills lobbed the ball forward from the left, Millbank got there first and as it bounced up he was able to nod it over Blue who had come off his line. Whitstable went looking for a second and Reece Gillies made a good run down the left, but put the ball wide, then Millbank tried a low shot from outside the area that was safely held by Blue. Jay Hards was brought down in a dangerous position, but Millbank’s free kick was blocked by the wall. Whitstable next won possession in midfield to give Millbank another sight of goal, but his low shot was again saved by Blue. There was a late booking for Leo Mazzone when he handled the ball in midfield before the half time whistle blew with Whitstable leading by the single goal.

The second half would prove to be a very different game, but it began quietly as a VCD corner was headed wide by Lea Dawson and then Millbank did well to win the ball, but was unable to get enough power behind his shot to trouble Blue. Whitstable were unhappy with the award of a free kick on the left touchline for a challenge by Ollie Gray and less so when the delivery by Chris Edwards was headed on by Barry for Ashley Probets to touch the ball past Eason to level the scores in the 54th minute. Just two minutes later, VCD struck again when Edwards cut across from the right before hitting an unstoppable left footed shot into the top left corner from just outside the box. After Elliott had glanced a header from a corner over the bar, Whitstable sent on Luke Medley to play up front alongside Millbank. VCD were in no mood to surrender their advantage though and added a third goal in the 68th minute when another Hudson cross from the left was headed in by Elliott.

The ball was in the Whitstable net again when Vines volleyed a cross past Eason, but the effort was ruled out for offside. Dawson and Hudson both tried to add to the score, but it was a gift from Whitstable that finally allowed them to add a fourth in the 75th minute. As Eason came out towards the left corner, his attempted clearance struck Tom Bryant and the ball dropped kindly for Elliott whose cross was tapped in by Vines. Whitstable kept trying, but rarely threatened and there was little else for the crowd to get excited about in the closing stages on a chilly afternoon before the final whistle sent VCD to the top and Whitstable to the bottom of the early table.

Whitstable will be hoping for an improved performance when they travel to Haywards Heath on Saturday.