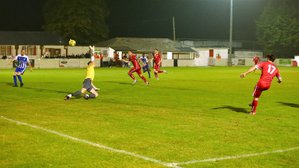 A late goal by substitute Gus Barnes earned Whitstable a draw and their first point of the season in their fifth game. There were few chances in a relatively quiet first half, although VCD often looked the more likely to break the deadlock and the pressure grew after the break. It took an unlucky own goal by Jack Miles to eventually put the visitors ahead and it looked as though Whitstable’s difficult start would continue until the dramatic late equaliser. Aaron Millbank might have won it in added time, but was denied by VCD goalkeeper Sam Mott.

The game’s first corner taken by Chris Edwards bounced awkwardly in the Whitstable box, with the ball eventually being headed off the line by Jake Mackenzie. The first 20 minutes saw few threats on either goal, then an Edwards cross from the right was headed harmlessly wide by Anthony Adesite. Whitstable had an opportunity in the 27th minute when George McIlroy was fouled just outside the box on the right and Walder pulled the free kick back to the 18 yard line where an unmarked Gillies was unable to keep his shot down and the ball sailed high and wide. Miles was then twice on hand to clear dangerous balls into the Whitstable box and another good low cross by Edwards was put over the bar from close range. Mackenzie then found Ryan Flack as Whitstable attacked on the right and his left footed shot from 20 yards curled just wide. Dan Eason then grabbed another deflected attempt by Adesite from under the bar. On the stroke of half time, Millbank was fouled just outside the box and Walder’s free kick was deflected behind for a corner by a head in the wall, so the score remained 0-0 at the interval.

Joe Bingham was replaced by Malachi Hudson at the restart and Edwards soon cut in from the right before sending a shot just wide. VCD had a good spell with Youssef Bamba, Ayman El-Mogharbel and Hudson all having attempts without troubling Eason. Miles was booked for a mistimed heavy challenge on Etumnu, then a few minutes later Elliott struck another free kick over the bar. After both managers had made changes, VCD won a corner on the left that went across to the far side and when Bamba curled the ball back in, Walder tried unsuccessfully to head clear and the unfortunate Miles diverted it past Eason to give the visitors the lead on 76 minutes. A couple of chances to make sure of an away win were not taken, as a header flew wide and Eason comfortably saved a low Hudson shot. In the 87th minute, Whitstable were level. Kiki Oshilaja tried to pass back to Mott following a long ball down the left by Luke Girt, but Barnes was alert and intercepted before the goalkeeper could collect and although he initially took the ball away from goal, the young striker kept his composure, turned and curled the ball past Mott. Adesite twice threatened to restore the lead, but Whitstable nearly got a stoppage time winner themselves when Harry Stannard found Millbank, who turned and shot towards the bottom right corner, but Mott did well to push the ball out for a corner. Whitstable failed to get the ball into the box before the final whistle and the game ended 1-1.

There is no game for Whitstable on Saturday when the next round of the FA Cup takes place, so their next game will be the following week when they travel to Chichester for an FA Trophy tie.