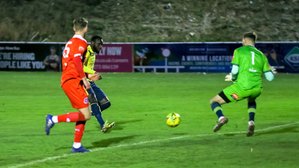 This was a game that will not be fondly remembered for the quality of the football by either team or the 292 hardy souls who endured the bitterly cold, gale force winds as Storm Arwen swept south. Those travelling back to Kent however could raise a smile as they thawed out and reflected on a moment of quality from Jake Mackenzie as he set up the chance for Kemo Darboe to score his first Whitstable goal, and some gritty defending in difficult conditions, despite losing two players to injury during the game.

Having achieved their first away win last weekend, Whitstable were hoping to recover from their heavy midweek loss to Dartford in the county cup final and register another success in their quest to climb the table. Three of those who played at Hythe though were unavailable: Stephen Okoh, Luke Illsley and the injured Ollie Gray. Rodney Eruotor came in for his debut and there were just three on the bench. Whitehawk had so far managed five league wins, but lost 3-1 at Ramsgate in their last outing.

The home team kicked off playing down the significant slope with the strong wind behind them, so it was no surprise that most of the early action was in the Whitstable half. The second Hawks corner saw the ball arrive at the feet of Javaun Splatt whose first attempt rebounded back to him, so he tried again, but Dan Eason did well to push his left footed shot away. The Whitstable goalkeeper also had to be alert to the next corner, blocking an in swinging effort by Omarr Lawson at the near post. Adam El-Abd, who made over 300 appearances for Brighton in his long career, swung over a cross that was headed in by Declan Kama, but referee Gerry Heron had spotted a foul and cut short the celebrations. Whitstable then suffered their first injury blow as Alex Gaggin limped off to be replaced by James Brown in the 19th minute, forcing a reshuffle. Billie Clark was put through by Splatt, but the promising seventeen year old shot just wide of the far post. Tom Carlton was then hurt when fouled, but managed to play on until having to be substituted early in the second half. Former Herne Bay, Ashford and Margate defender Mo Kamara ran unchallenged from the halfway line into the box before crossing to Splatt who glanced his header wide. Whitstable had failed to provide any threat at the other end until the 40th minute when Eruotor collected a pass from Victor Aiyelabola and managed a shot that was easily blocked. Two home corners just before the interval were safely negotiated and Whitstable would have been pleased to reach half time at 0-0 with the prospect of conditions in their favour when play restarted.

An early Whitstable corner was sent right through a crowded box by Danny Walder, but no one could get a touch, then Gus Barnes delivered a cross that went past the far post. Following a change from both teams, Lawson worked himself a good position and his rising shot flew just over the bar. Both managers made another substitution, before the decisive moment arrived in the 74th minute. Mackenzie was quick to intercept a pass near the halfway line and galloped forward down the right before delivering an early low cross to the arriving Darboe who controlled the ball before squeezing it past the goalkeeper and celebrating with a few well-wrapped Whitstable fans behind the goal. Harry Goodger then tried a long distance lob that was too high, but the pressure was mounting at the other end. A Kamara shot struck Walder, James Fraser latched onto the loose ball and shot towards the far corner, but Brown was on the post to clear. The Whitstable defence was busy for the next few minutes, but Eason remained well protected. Walder had a long range free kick saved after Lewis Unwin was booked for a foul. Whitstable defenders got in the way of a couple more efforts, Brown was cautioned for taking too long over a free kick and Barnes got back well to draw a foul in added time, to ensure that a hard-earned three points would be returning to north Kent.

Having moved up one place in the table, Whitstable will now be grateful for a free midweek to recover before facing Haywards Heath at the Belmont on Saturday.