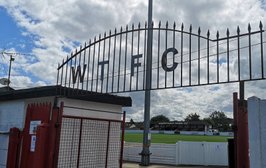 Whitstable are pleased to confirm the signing of Ryan Flack from Cray Valley. The winger was part of the Millers team that lost to Chertsey Town in the FA Vase final in May 2019 and played a key role in his team reaching the Wembley final by scoring the only goal in the first leg of the semi-final against Canterbury City. Ryan has also played for Welling United, Tilbury, Chatham Town and Thamesmead Town.

“I’m delighted to announce the signing of Ryan Flack from Cray Valley.

Ryan has had lots of interest, but we’ve been speaking on the phone for the last ten days and we’ve already built up a good relationship. He is an offensive player who plays anywhere in the attacking third and adds real quality to the group. He goes straight into the squad to face Burgess Hill on Saturday.

Welcome to the Belmont, Ryan.”