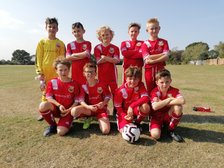 Saturday 19th September 2020, the long wait was over. Forget your premier league, champions league and Carabao Cup, this was the real return of football as we know it. Players, Coaches and Parents gathered on the hallowed Radfall turf for the return of the Whitstable Town Under 10s.

All 9 lads in the squad were present, ready and keen, having been putting in the hard graft in summer training. Pre-season training can only prepare you for these moments, the boys needed to show the mentality for the big occasion in front a crowd bigger than the current professional scene.

Special mention to the new threads sported by the team, in their brand new kit, they certainly looked the part, thanks to Tony and Andy for sorting and sponsoring!

The opening fixture opponents were Woodnesborough FC, who took to playing in bibs to avoid the colour clash. They were a nice bunch and we wish them luck for the rest of the season.

We started in the now familiar 2-3-1 formation. Louis in goal, like a yellow ninja in the new kit! Max B and Captain Isaac at the back. Max P in the centre, Flynn and Alfie on the wings and Daylee up front. Finlay and Kasper keen to influence from the bench.
Having had a decent warm up we ditched our customary slow start to be at it from the off. Whilst we were playing some lovely football it became clear that two factors would have a big influence on the game, the first being the blustery conditions and the second being their keeper, who was so tall he could nearly hit his head on the crossbar!

We opened the scoring when Alfie pounced after the keeper failed to hold a shot from Daylee. The Woodnesborough equaliser to be fair was an early contender for goal of the season, their lad ducked in from the left, jinked past a couple of players and planted a cracking effort into the top corner.

Kasper and Finlay both came on and put in a shift, we continued to play well and put some of the training into practice with some lovely moves that on another days would have reaped more goals.

After good pressure we did get a second when a Max B throw was nicely steered home by Daylee, so we went in ahead at half time.
The wind continued to make playing decent football difficult and all the lads coped well with the longer ball game of the opposition. But Woodnesborough never gave up and got an second half equaliser.

The resulting draw was maybe harsh on us, when looking at chances created, but all the lads performed well and showed great attitude throughout. Daylee and Alfie in particular never stopped running and Isaac deservedly took the man of match award, sponsored by Haribo.

Footnote: Is cake restricted under current guidelines from the government?