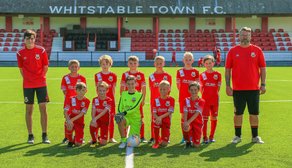 Great performance from the Under 10s

Saturday 17th October, Under 10s taking on East Kent,
Playing for Whitstable, proud to represent,
Full squad of players, dressed top to toe in red,
An expectant crowd and a cake made by Fred!

Battling tackles from Max P and Max B,
Phillip defending, plenty of running from Finlay
Louis in goal and Isaac a captain that led
But please don’t forget the cake made by Fred

Alfie shoots, Daylee sprints and Kasper crosses,
The early lead slips but we don’t want more loses
A great goal back, struck over the keepers head,
Did I mention the cake made by Fred?

The ref gifts them a goal, with a debatable pen,
Back to two each for our heroes numbering ten,
They have all played well, worth getting out of bed
Has anyone tried this cake made by Fred?

Isaac bursts down the wing and puts the ball in
Alfie strikes home, will we hold on for the win
Alas no, the equalizer comes, but at least we are fed
As we finally eat that cake made by Fred

**When leaving the grass pitch please use the designated boot cleaning area to minimise mud on the playground
** The school playing fields are a no-smoking venue.
**St Peters school does not allow pets on