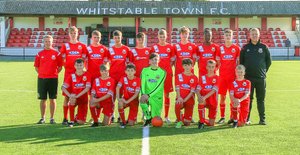 The U15 KYL team extended their winning run to six games as they overcame local rivals Herne Bay in an exciting match.

Whitstable came from behind in an exciting game against Herne Bay to win 2-1 on a bright but cold and windy afternoon. With the touchline packed with parents and supporters there was a tense atmosphere as both teams - along with Folkestone and Margate - have ambitions to be potential league winners this season.

And it was Herne Bay who came out of the traps a bit sharper as they raced into an early lead in only the second minute of the game. A long ball over the top caught out Whitstable and Herne Bay striker Jamie Lartice raced on to it as it fell in the box. Goalkeeper Stanley Allom got hands to the ball from Lartice’s shot but couldn’t prevent it from going in.

Herne Bay continued to press and had the better of the game for the first ten minutes as Whitstable took their time to settle after that early set back. However, settle they did as they started to move the ball around nicely and put pressure on the Herne Bay back line with Dylan Richards and Sonny Hemmings working well down the flanks and Jake Salisbury connecting the play up front. Herne Bay persisted though and had a shout for a penalty that was waved away before Whitstable earned one themselves at the other end of the pitch. It was captain Archie Rumball who played a clever one-two with striker Salisbury and was then upended in the box by a Herne Bay defender as he was about to shoot.

Rumball dusted himself down to take the 18th minute penalty and tucked it away in the bottom corner. Herne Bay keeper Carter Sullivan - who had an excellent game throughout - went the right way but couldn’t quite reach it. Sullivan was called into action again a couple of minutes later and this time saved a close range shot from Rumball as Whitstable continued to press. Herne Bay kept going as well and could have taken the lead for a second time but blazed over the bar following a free kick. They then hit the woodwork following a corner. A close first half ended with the teams level.

Whitstable made several changes at the break with Alex Brownett, Michael Nkereuwem and Will Knoupe entering the fray and Callum Groom moving from left back to left wing. At the top of the pitch there were changes as well with Hemmings moving into a more central attacking position as Salisbury came off.

And it was Hemmings, who had a particularly strong second half game, who scored the goal that settled the match. This time it was Whitstable’s turn to score an early goal in the half as their pressing play proved hard to defend against. Hemmings took on the Bay backline and as the keeper came out to close the angle, Hemmings deftly lobbed the ball over the on-rushing goalie to score a memorable goal in the 4th minute of the half.

The game was quite a physical and competitive one with both Alfie Hill - playing against the side he left in January - and Nkereuwem, who returned after missing the last two games, as well as a couple of Bay players needing attention on the pitch during the game. There were plenty of good on-field battles as well in this derby although it was only Whitstable’s Leo Cornhill that ended up in the referee’s notebook. And in the middle of the park, Harrison Wade had another strong game for Town making some important challenges.

Joshua Thomas-Wright came on for the final 20 minutes of the game and his pace and work rate proved a challenge for the visitors to cope with. He connected well with left back Knoupe as Whistable turned up the pressure and made some excellent passes and interplay that could have extended their lead.

Whitstable’s back line had an excellent game as well with centre backs Will Derby and Ollie Bunn reading the game well and limiting Bay’s chances. But Bay did still manage to create and they had a number of free kicks and corners that Whitstable had to be alert to defend. Keeper Allom was called into action several times and had to make some smart saves to keep Whitstable’s lead intact.

But the home side continued to enjoy a number of chances themselves with the Bay keeper having to save from Groom as Hemmings played him in and then had to repeat the feat against Hemmings who proved a menace throughout the second half.

There were no more goals in the game however and after a hard fought 80 minutes, Whitsable emerged as victors and remain at the top of the table just one point above next week’s opponents Folkestone.