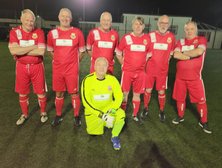 Another loss but an improved performance

On Tuesday 26th June we took on a Margate side that had beaten us easily 10-1 on home soil earlier in the season.

We went into the game full of optimism after our performance in the previous game. The improvement continued as we started the game against Margate on the front foot, having a few opportunities to score and some fine goalkeeper saves kept us in it until an unfortunate defensive mistake saw us go in at half trailing by the single goal.

The second half followed the same pattern with us pushing forward and we had a goal by Steve Willey disallowed for encroachment. Shortly afterwards, we conceded again against the run of play. Our keeper made a double save to continue his fine form, but could do nothing with a shot that was rifled in from the angle to the top corner. We then scored, Steve Willey this time finishing well, however the last 10 minutes saw us lose our shape and we eventually went down to a 6-1 defeat.
We can hold our heads up high, as this was our best performance of the season by far. A special mention to Terry and Paul in goal, who have to share the man of the match award.